Parco Villa Gregoriana will be closed o public up to 27th November due to extraordinary maintenance.

Woods, trails, ancient ruins, natural caves, a river swallowed by the rocks and a spectacular waterfall: all of this just a stone’s throw from Rome, in a park commissioned by Pope Gregory XVI in the early 19th century.

Loaned to FAI by the Italian State in 2002.In the city of Tivoli, only half an hour from Rome, Parco Villa Gregoriana preserves a rich heritage, resonating with the sublime imagery that was so popular in the Romantic period. Nature, history, archaeology and craft merge in such an enthralling blend that in the 19th century this site became a must-see destination of the Grand Tour and the most popular subject in the paintings portraying Tivoli. In 1832, on the initiative of Pope Gregory XVI, an impressive work of hydraulic engineering was undertaken to contain the unceasing floods of river Aniene. The stream was deviated in a double tunnel dug into Mount Catillo: the water, channeled in this bottleneck, increased its level and fell in the artificial 120 meters waterfall known as Cascata Grande, which is today the second highest waterfall in Italy, behind Marmore Falls.In addition to that, the Pope created the Park that bears his name and was, for over a century, a favoured destination for artists, writers and men of culture, who disclosed its beauty to the whole world.After World War II, Parco Villa Gregoriana became the property of the State and in 2002 it was loaned to FAI. At that time, the site was in an advanced state of abandonment and hydrogeological instability. FAI’s commitment, however, brought it back to life: in 2005, Parco Villa Gregoriana reopened to visitors, who today can immerse themselves in the most luxuriant greenery, walk through the old trails finally free from brambles, smell the scents previously buried under decades of neglect and abandonment, use all the senses to discover the 74 tree species found in the park, explore interesting relics of past eras. Among these, the highlights are the remains of the Villa of the Roman Consul Manlius Vopiscus, a sumptuous residence celebrated by Horace, and the Roman temples on the acropolis, which include the renowned Temple of Vesta.

Closing times might be subject to variations in March and October, depending on the sunset. We recommend to contact the Property (ph. +39 0774 332650) for further information.

How to get here

Exit and bookshop from the Temple of Vesta.

The station is 5 minutes (400 m) from the entrance of Parco Villa Gregoriana.

From Rome, Ponte Mammolo, Tivoli bus stop.By car
From A24 (Roma – L’Aquila), take the exit for Tivoli or Castel Madama, then follow the signs to Tivoli, Villa Gregoriana.

*with the exception of special events taking place, in which case only the price of the admission to the event will be charged

All prices are subject to variation during certain events.

Further information about the site:

Except for special weather conditions, Parco Villa Gregoriana in case of rain is regularly open to the public. No refunds of tickets admitted.

Guided tours for groups and school groups can be booked in advance.

A careful selection of books, items and merchandising is waiting for you, inspired by the place you have visited and the territory that hosts it; you will find a colorful assortment of FAI objects and food products made with the raw materials of our Goods: Marmalades from the ancient citrus fruits and extra jam of the prickly pears of the Kolymbethra Garden, extra virgin olive oil from the centuries-old olive trees of the Bay of Ieranto, honey from the hives of the Monastery of Torba.

And if you are a member of FAI you have 10% discount on all products!

Dogs on a leash are allowed in the Park.

People with disabilities have free access to FAI properties.

Unfortunately, Parco Villa Gregoriana is not yet fully equipped to meet the needs of people with motor disabilities. Please contact the property for more detailed information.

A pic-nic area is available for school groups.

Choose Parco Villa Gregoriana as a venue for your events!

The charm of the most romantic park in Italy

Nature and history merge in a blend of perfect harmony at Parco Villa Gregoriana, just a stone’s throw from Rome. The Park offers a wide array of spaces, most of which are outdoors, available for hire and suitable for MICE and private events.

Moreover, choosing a FAI property as a location for your event you will give your contribution to the preservation and protection of the Italian heritage.

What sort of things can you do at Parco Villa Gregoriana?

Private events
Wedding receptions: the municipality of Tivoli allows civil marriages to be celebrated in the Park. Ceremonies take place in three of the most enthralling spots in the site: the panoramic viewpoint on the Grande Cascata; the ancient ruins of the Villa of the Roman Consul Manlius Vopiscus; the Acropoli Tiburtina, a charming terrace at the foot of the Roman temples overlooking the valley, dedicated to Albunea, the Tiburtine Sibyl, and Tiburnus.

The Property works together with trusted restaurants and catering suppliers to ensure impeccable service.

Business events
The Visitors’Center, an elegant building designed by Gae Aulenti, is a perfect venue for organizing meeting and presentations. Team building activities, such as gardening, are also available.

Filming and photo shooting
The picturesque charm of Parco Villa Gregoriana makes it the ideal location for photo shoots and all kinds of professional filming. 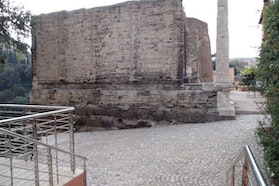 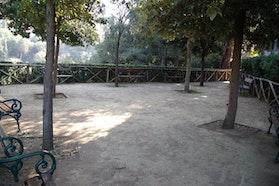 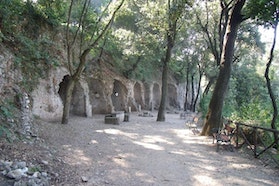 Ancient ruins of the Villa of Manlius Vopiscus 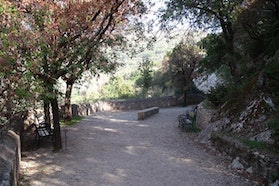 Panoramic viewpoint on the Grande Cascata 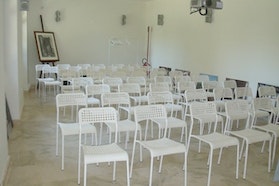 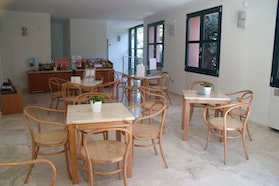