follow us on facebook
In compliance with the decree of the President of the Council of Ministers of March 8th, 2020 FAI properties will remain closed until April 3rd.

Kolymbethra Garden is a rare archaeological and agricultural jewel; an extraordinary place that encapsulates the colours, flavours and aromas of Sicily and – through its archaeological finds and its hypogea, excavated 2500 years ago – tells the story of ancient Akragas, the city now called Agrigento.

Located in Agrigento, Kolymbethra Garden is a shaded corner of paradise, where centuries-old olive trees prosper and where the citrus fruits flood the Valley of the Temples with their fragrances. An embodiment of the promised land and an exceptional garden, where nature is fused with history, this little valley is a significant part of Akragas, the city founded by the Greeks in the 6th century B.C. Diodorus Siculus describes how, in 480 B.C., to supply the city with water, the tyrant Therone commissioned the planning of a network of tunnels that came to an end at the foot of the urbe in a large basin called Kolymbethra, meaning “with a perimeter of seven stadia”, which was soon converted into a fish farm and frequented by swans and birds. Crucially, the project transformed a piece of the arid Sicilian countryside into a blossoming garden of Mediterranean foliage.

In later centuries, this bona fide “garden of delights” came to be owned by the Church, which introduced citrus trees. Its golden age came in the 19th century, when it became a must-see stop-off on the Grand Tour. In the final decades of the 20th century, due to the disappearance of the old farmworkers, Kolymbethra fell into rack and ruin, until it was rescued by FAI, which reinstated its former splendour. The garden is now a worthy adjunct to a visit to the evocative Archaeology Park nearby, and a thrill for the five senses: from the aroma of the orange blossom to the flavour of the almonds, from the silvery tint of the olive trees to the moisture of the soil, all accompanied by the delicate sound of water constantly flowing in the background. No visit is complete without a trip along the new routes to the hypogea (underground chambers), which are of great interest in terms of archaeology, speleology and the natural environment.

Kolymbethra Garden is open with the following hours:

By car
From Agrigento, follow the signs for the Valley of the Temples (“Valle dei Templi”).

By train
From Palermo or Caltanissetta, on reaching Agrigento proceed by bus towards the Valley of the Temples (“Valle dei Templi”), in the direction marked as “Porta V”.

By bus
Scheduled bus from Agrigento Centrale train station; get off at the “Porta V” stop.

*with the exception of specific events, when the additional event charge will apply.During events the price may be subject to change

Hypogea (Underground Chamber) RouteGroups of 8-10 people for a one-hour tour including: introduction to Kolymbethra Garden and the system of hypogea (underground chambers), preparation and provision of necessary equipment, tour lasting around 40 minutes within the hypogea with personnel of the Associazione Agrigento Sotterranea (Agrigrento Underground Association).

The hypogea are accessible for visits every day, starting at 10am. Last entry: 60 minutes before closure of the garden. Prior booking is strongly recommended. Comfortable clothes and closed shoes are recommended for visits to the hypogea. The site is challenging for those who have difficulty walking – please contact the garden for more information.

Combined ticket
The combined ticket includes entry to Parco Valle dei Templi (the Valley of the Temples Park), Kolymbethra Garden and the Temple of Vulcan. Combined tickets can be purchased at the ticket desks in the Park.

Guided tours are available with prior booking for groups (maximum 50 people) in Italian and English, French, German and Spanish, at a cost of €50.00.

For information and bookings: faikolymbethra@fondoambiente.it

The paths are dirt tracks, but are accessible by strollers/pushchairs and, as such, partial visits are possible (taking in only the flat section of the garden). Such visits can only be carried out by prior booking (call +39 335 1229042) to organise access via the northern entrance of the garden. Those with disabilities must always be accompanied by their companion.

The garden has a picnic area with benches affording panoramic views.

Purchases from the bookshop make a tangible contribution to supporting FAI.

Choose Kolymbethra Garden for your events!

A fragrant garden of Eden in Agrigento

Kolymbethra Garden is the perfect choice for photo sessions and film shoots, and for companies that want to offer their employees unique experiences.

Moreover, choosing a FAI property for your event contributes to the conservation and protection of Italy’s heritage.

What can you do at Kolymbethra Garden?

Photo/video shoots
The garden serves as the ideal backdrop for photo shoots and film shoots. 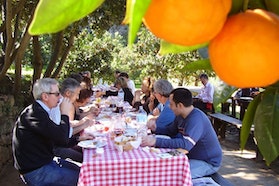 Furnished area under the orange trees