71 m2, 60 seats in the stalls and 20 on two tiers of balconies – these are the facts and figures of this ancient barn on a hillside in the province of Lucca, which was transformed into a theatre in the late 19th century. It appears in the Guinness Book of Records as the world’s smallest.

Donated to FAI by the Biagioni family and entrusted on a loan-for-use basis by the Municipality of Pescaglia in 1997.

On the Apennine near Lucca, in Vetriano, there is a little jewel waiting to be discovered. Its history dates back to 1889, when engineer Virgilio Biagini gave a barn to the community to be turned into a theatre. The inhabitants, mostly farmworkers, warmly welcomed the donation, and set up a Società Paesana (local company) that taxed itself a one-off payment of 2 lire and then 50 cents per month to build the theatre and cover the labour costs. Thanks to the hard work of the local people, the theatre was constructed in just one year, and in 1890 the stage, framed by Neoclassical decorations, was used for the theatre’s first plays, which were mostly works in verse and musical comedies, often written and acted out by the inhabitants themselves who, to attend the performances, often had to bring their own chairs with them. The schedule was soon filled, and the little theatre became a dramatic hub for the entire area. Over the years, the Società Paesana ceased to be and the theatre was neglected to the extent that it could no longer be used. In 1997, the descendants of Virgilio Biagini donated their share of the theatre to FAI so that the Trust could take care of it. After a painstaking restoration process, the little theatre in Vetriano has been given a new lease of life and now provides the venue for brilliant comedies, shows and events with a maximum audience of 85. Today, we can once again admire the way it looked in the late 19th century, with its 5.5 x 5.5m2 stage and its beautiful painted curtain. Underneath the theatre, there are two dressing rooms, a costume shop and a small costume store.

The Vetriano Theatre is open to the public by prior booking (only guided visits allowed) .

The theatre is closed to the public from December 1st to January 2nd.

Special openings according to calendar events .

How to get here

From the A11 Florence-Coast Motorway (“Autostrada A11 Firenze-Mare”) take the Lucca East (“Lucca Est”) exit. Proceed towards Garfagnana on the SS 12 Abetone highway to Diecimo, then follow the signs for the “Teatrino di Vetriano”.

To support the activities of the theatre, a contribution of €5.00 will be gratefully received.

During events the price may be subject to change.

Guided tours lasting 40 minutes are available for groups and schools. Prior booking required. For information, write to faivetriano@fondoambiente.it or call (+39) 0583 358131 (mealtimes).

Choose Teatrino di Vetriano as a venue for your events!

The world’s smallest theatre, near Lucca

This jewel of a theatre, measuring a mere 71 m2, dates from the late 19th century. It is a fascinating venue for small concerts, shows and presentations, and a unique backdrop for weddings. If you choose the theatre for your events, you can look forward to an unusual, unforgettable experience.

In addition, by choosing a FAI property for your event, you are contributing to the conservation and safeguarding of Italy’s heritage. 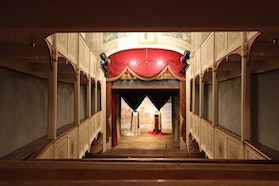 A THEATRE ON THE SMALLEST OF SCALES